Tale of the Portress

We're Getting Mutants in the MCU - The Loop

The portress inherits money from her father and later from her husband. She takes pity on a poor old woman who has no money to buy clothes for her daughter's wedding, but it turns out to be a trick to get her close to the woman's brother. The portress falls in love with him and he makes her swear by the Quran to never look at another man.

One day she goes out shopping, but a seller asks for a kiss instead of money. At the old lady's urging, the portress agrees to a kiss, but he bites her. Her husband sees the bite and wants to have her killed, but finally just beats her and sends her away. She later finds her husband's house in ruins, and goes to live with her half-sister on her father's side.

After hearing all of this, the Caliph has the Jinniyah summoned. He has the sisters transformed back into people. She reveals that the portress' husband is the Caliph's son, so they call him and he and the portress are remarried and made rich. 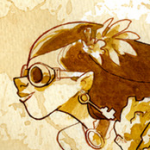